The 3rd Fox Valley open tournament took place on December 10th, 2011 at the Eola Community Center.  The tournament attracted 69 players in three levels: amateur, intermediate and advanced.  The word of the tournament is reaching farther and farther with each tournament because in addition to players from the greater Chicago area, we had 3 players from Wisconsin and 1 from Colorado.  We didn’t have any no shows and quite a few spectators.

This was the first tournament we played on the brand new Killerspin MyT10 Club Pro tables which we got in October.  It finally made the playing conditions in our gym on par with other venues.

I would like to thank everyone who helped with setup of the tables and nets, assembly of the barriers, folding back the tables, dissasembly of the barriers and cleanup after the tournament but especially the following individuals: Jim Golick, Ken Robbins, Gene Bender, David Perrine, John Brandt and Jacek Wisniewski who served as a referee in the final matches in the advanced level.  Without your help the tournament would not start and end on time.  I also want to thank Tomasz Szacilowski who repaired one of the tables which allowed us to have 12 working tables.

Finally, the tournament run smoother thanks to my children Matthew, Justine and Danielle who helped with the check-in process, took pictures, entered scores and determined who advances out of the round robin phase.

The group participants were as follows: 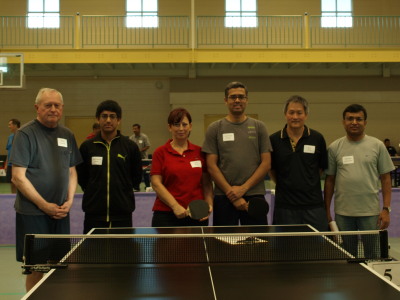 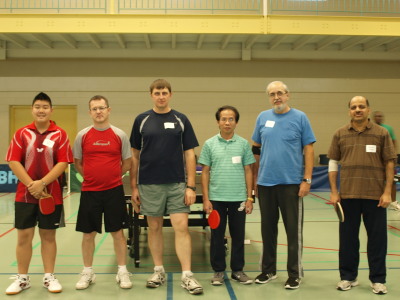 We didn’t take a picture of group 9 & 10.  Below are the remaining groups. 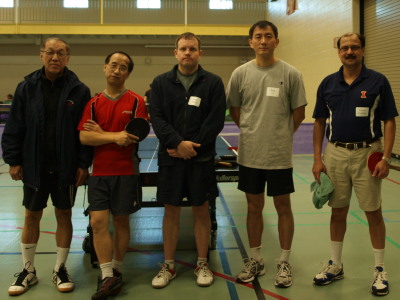 The round robin phase resulted in the following placement of players:

The top two players from each group advanced to the single elimination phase.  Below are the brackets and match results for quarter-finals, semi-finals and finals. 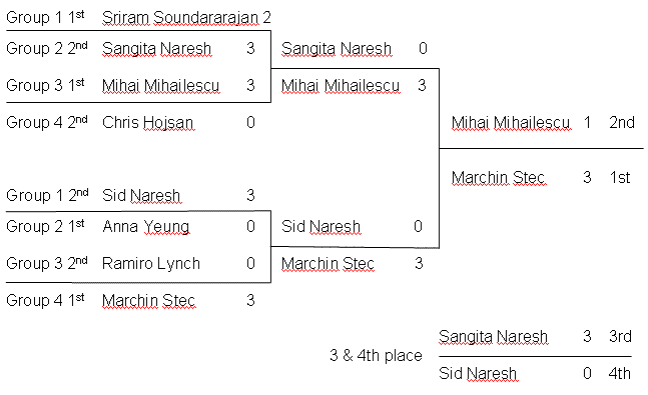 We celebrate the winners by giving them the trophies or cash prizes and making them stand on the podium.
In the Amateur division the first 4 places were:
1) Marcin Stec
2) Mihai Mihailescu
3) Sangita Naresh
4) Sid Naresh 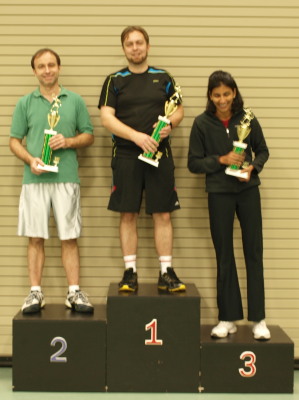 In the intermediate division the first four places were as follows:
1) Krzysztof Fudala
2) Zachary Moy
3) Ron Casidy (Ron had to leave early so he is not standing on the podium)
4) Tushar Naik 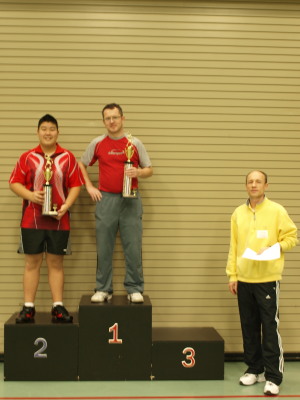 If you are interested in what participants had to say about our tournament please visit this page.