The 3rd Aurora Cup was held on 3 bitterly cold days in January (15 – 17th) 2016.  Despite the frigid weather 303 players descended on the Vaughan Athletic Center to take part in what is now becoming an annual Aurora tradition.  The players competed in 24 events and played a total of 1419 matches – 105 more than a year earlier – thanks to addition of 4 hours of play on Friday evening.

While the number of attendees was slightly smaller than last year – 303 vs 310 in 2015 – it was still the 4th largest tournament in the USA in the last 12 months.  The numbers of players shown below don’t include players who played only doubles matches, so if we exclude them, the 2016 Aurora Cup had 295 players. Below is the list of top 10 tournaments in the nation:

Vast majority of players came from the USA but there were also a couple from Mexico and Haiti.  The top 6 highest rated players were:

Attendees had an opportunity to witness a world class level match between eventual winner of Open Singles Ruichao L. Chen and Kai Zhang.

The players came from the following states:

The tournament would not be possible without the help of the following individuals during setup, take down and at the tournament:

John, Jim, Benjamin and Rebecca Brandt who measured and marked all 38 courts and helped with installing ropes for sun screen. 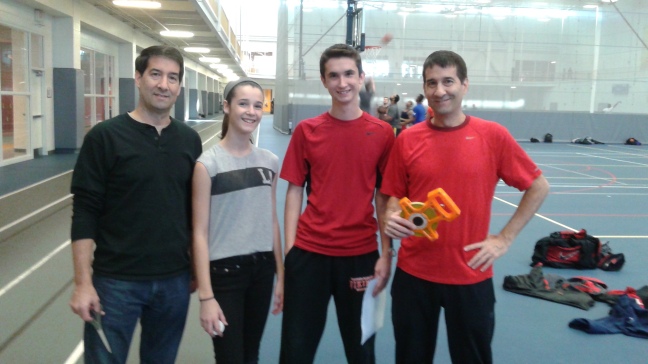 Steve Logquist, George Vaughan, James Madrid who unloaded the tables, barriers and other smaller equipment from the truck and loaded it back up.  They also moved tables and barriers before and after the tournament.

Josh Szot , Matthew Lorenc – disassembly and packing of barriers and other smaller equipment.

Part of the operation was a new experience for all of us since in the past two tournaments our sponsor handled setup and take down of table tennis equipment.  Unloading from truck took about 1.5 hours and loading it back up 2.5 hours.

Assembly of 450 barriers took 3 people 3 hours on Friday plus 5 hours of Saturday with the help of 5 people.

I would like to thank the following companies and organizations for sponsoring our tournament:

JOOLA USA was our equipment sponsor who provided us with 38 tables, 450+ barriers, umpire tables, score boards and the newest seamless plastic Flash balls.

Infogix Inc. an enterprise software company, which funded major portion of the nice crystal trophies and lent us 100 chairs which enhanced comfort for our participants.

Experior Transport which transported all table tennis equipment from California to Aurora and from Aurora to Maryland, on time and took great care of it.

Aurora Area Convention and Visitors Bureau – which provided us with a large Aurora Cup trophy awarded to winners in Open Singles and Women Singles events.

The following were the top 4 finishers in each of the held events. Open Doubles was cancelled due to low interest.

And here are the winners on the podium.  See event name under each picture.

I would like to thank everyone who participated in the tournament and invite you to the next edition in 2017. See you then.