2018 Aurora Summer Open was another successful tournament – 100 players entered.  While some participants pulled out at the last minute luckily we had players on the waiting list who filled the open spots literally hours before tournament start time.  However, there were still 4 no shows.

Tournament organizers (Swavek Lorenc, John Brandt, Jim Brandt and Michael Curry) would like to thank Newgy Inc. which donated 15 barriers. We only need 10 more to have all 12 courts completely barriered using only purple Newgy barriers.  See picture below of our current setup.

We would like to also thank Paddle Palace for donating 4 dozen Nittaku balls.  They have been supporting our tournament since 2011.

Thank you Newgy and Paddle Palace.  (And please support these companies through your purchases) 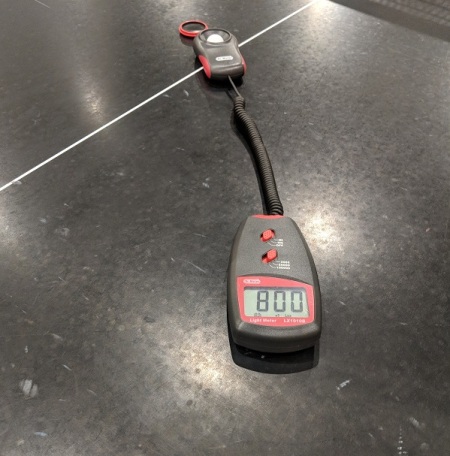 Finally, we had the opportunity to play for the first time under strong LED lights.  The Fox Valley Park District upgraded lights in several of its buildings and one of them was our gym.  The lights strength increased from about the average of 380 lux to average of 800.  The measurements were taken on both sides of each table with a dedicated meter and it showed anywhere from 617 to 916 lux (see above).  This means, that we could organize 4 star tournaments in this venue since 800 lux is required only for feature matches (e.g. open singles finals).

Setup commenced at 7:30 on Saturday and with the help of the following individuals was finished by 10 pm.  Justin Wu, Wesley Wu, Nagarathnam Narayan, Manikandan and Uma, Micheal Curry, Jim Brandt, John Brandt.  Volunteers not only setup the tables but also repaired and washed their tops thoroughly.  And here is the crew.

Tournament was running smoothly thanks to our umpire Andrew Moy and the rest of control desk crew which consisted of: Uma and Manikandan Nagarathnam, Jim Brandt, Wesley and Justin Wu.  We are developing the next generation of experienced volunteers who can take over running our tournaments in case I can no longer run them.

The same group of people helped with taking the equipment down.  We started around 7:30 and finished again just before 10 pm.  Mrs. Wu helped with this task as well when she stopped to pick up Justin and Wesley.

Thank you all who helped.

Here are the winners on the podium.

A few participants provided feedback on our tournament conduct.  Thank you.  Here they are:

Thank you for your email and results update.

I am relatively new to competitive table tennis, and have only played in 3 prior tournaments. However, I wish to mention how nicely organized your event in Aurora was last Sunday. I felt it was easy to find where to be, etc… The tournament had a professional feel to it.

I hope to participate in a future event in Aurora.